I had some very good reasons for not liking dogs:

-my sister Mandy always forced herself to gag at the sight of dog food, resulting in me feeding the dog WAY MORE than my fair share (Hey Mandy! I haven't forgotten about this!) 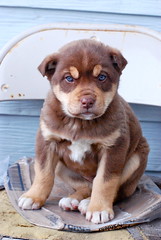 But, on Easter 2010 I was walking from house to house visiting my favorite babies, when I came across this pretty thing. It embarrasses me to to say this, but have you ever seen a more gorgeous puppy?

I thought about her the rest of the day. And when it was nighttime, I went searching for her and brought her home. 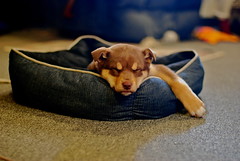 She made herself comfortable, and after searching for her real owner and the exchange of some cash, she was ours. We named her Sadie.

(Note to readers: The name Sadie was on our short-list of names for any potential daughters we may have in the future. I insist that using the name for a dog REMOVES the name from the potential baby list. Steve insists otherwise. It's still a point of debate around our house.) 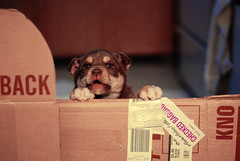 Sadie was willing to take time from her busy schedule to answer a few questions.

View from the North: What did you do all day as a puppy?

Sadie Alston: Steve and Angie tried barricading me in the kitchen. But, in addition to looking absolutely pitiful, I was a little escape artist. They eventually got a generously-sized kennel for me to stay in. 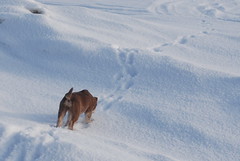 TAT: Wow, being cooped up in a cage doesn't sound very fun.

SA: It wasn't. That's why I whined a lot the first few days.

TAT: Did they leave you in there all the time?

SA: No, they took me on walks. 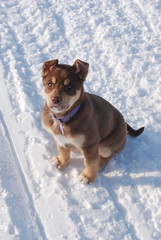 TAT: In the snow?

SA: I think they liked it. 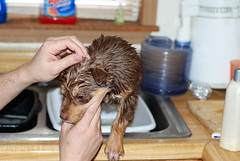 TAT: How did Steve and Angie adjust to being puppy parents?

SA: They did all right. They were obsessed with keeping me clean. Steve said something about me smelling funny. Unfortunately, Steve didn't know that I'm absolutely terrified of water. That was a fun surprise. 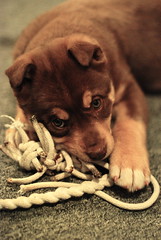 TAT: Did they have all of the equipment necessary to take care of a dog.

SA: Ha! They had nothing! My first toys were pieces of rope tied in knots and soaked in beef bullion. 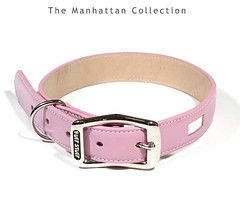 SA: Angie overcompensated by buying me designer stuff. Steve was absolutely appalled, and Angie has since decided that kind of shopping is unnecessary. It was good while it lasted.

TAT: Who do you like better, Angie or Steve?

SA: Angie is nicer to me, but I like Steve better. 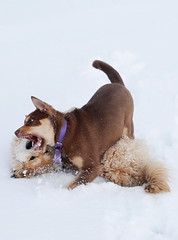 TAT: Did you have any friends in Shishmaref?

SA: There were a few neighbor dogs I ran around with, but I was a little young for permanent attachments. There's nobody I keep in touch with. 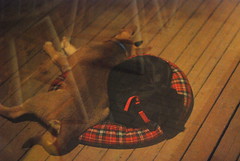 TAT: What did you do for the summer?

SA: I was going to stay in Alaska, but Grandma Alston insisted on meeting me. She said I wasn't quite as good as Steve and Angie having a baby but almost. I split my time between both sets of grandparents.

TAT: Don't Angie's parents have two ridiculously spoiled wiener dogs? How did you get along?

SA: Grandma and Grandpa Busch were afraid that I would use the tiny one as a chew toy, but I just ignored her because she yipped at me a lot (man, that was annoying!). The medium-sized one and I were great friends. She even shared her bed with me. 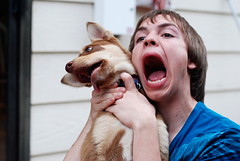 TAT: What about the rest of the family?

SA: They were nice. Uncle Joe was a little weird, but I hear there's one in every family. 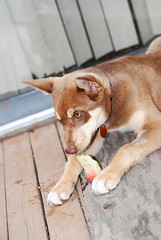 TAT: Did you pick up any strange habits while visiting the Busch House?

SA: Grandma Busch helped me discover that I like to eat watermelon rinds. She would save them for me. 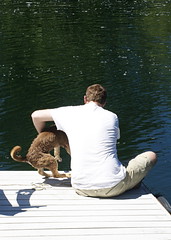 TAT: What was your least favorite part of the summer?

SA: Well, there was one extremely invasive surgery. Also, Steve tried to teach me to be unafraid of water.

TAT: I didn't know Steve was a swimming instructor.

SA: He's not. His lessons basically consisted of repeatedly tossing me in the St. Joe River and making me swim to shore. 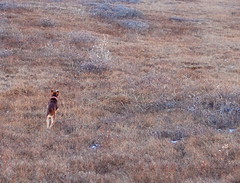 TAT: How did you like the move to Brevig Mission?

SA: There are a lot more places to walk in Brevig Mission. Angie used to take me on walks every day. 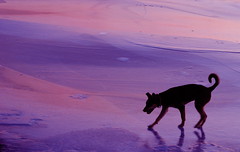 TAT: Used to? What happened?

SA: It got icy. I thought the ice beautifully reflected the sunsets, but Angie has this fear of falling.

SA: Definitely, given her history. Although, I personally think she's a little whiny.

SA: Yeah, Angie promises the walks will start up again once it gets lighter out. I'll believe it when I see it. 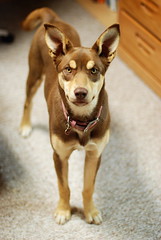 TAT would like to apologize for degenerating into the kind of blog that spends an entire post on a dog. It was never TAT's intention to blog about a dog, let alone adopt one. Please consider continuing to read this blog. Thank you.