This is a message from your friendly neighborhood social studies teacher reminding you to vote in the upcoming election or any election that might be happening in your respective country/state/province/city/village. If the students of Shishmaref can vote, you can too. 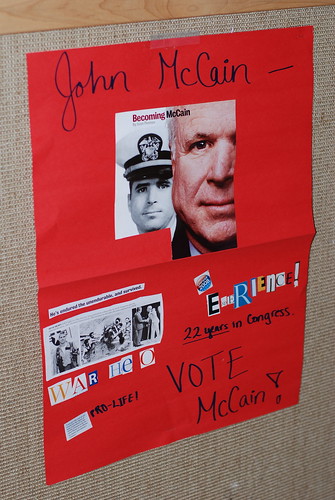 The Shishmaref Mock Election was school-wide, but it was kind of sponsored by my older kids. We started by making posters to hang in the elementary school hallway. 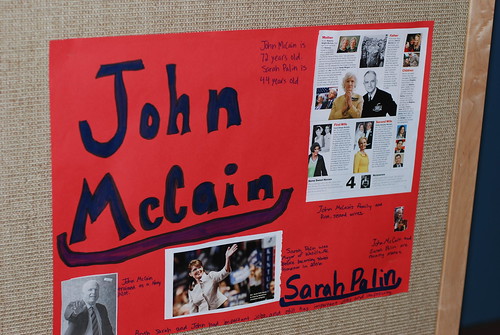 The posters featured facts about each candidate and posters cut up from five months worth of news magazines. (Hey Shishmaref Library and fellow teachers! Thanks for letting me steal all of your magazines!) Since we get enough negative advertising in the actual media, I insisted that the posters all be positive, much to the disappointment of my students. 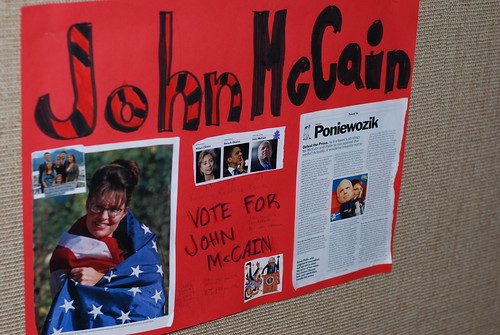 You may be noticing quite a few McCain posters. That's only because I made my kids draw names out of a basket. They were forced to make a poster for the candidate they drew. (It's not a secret: I'm mean.) 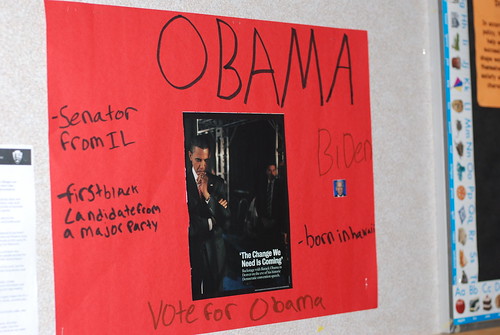 Otherwise, all of the posters would be like this (my kids are nutty for Obama). Notice the obligatory Biden mention. Ha! It's a nice representation of the percentage of real news coverage he gets. (Note to readers: do not interpret that as a Biden bash. It's simply commentary of his non-domination of campaign coverage.) 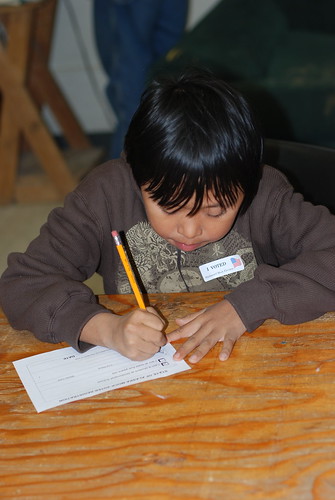 My big kids were the poll workers. When the other kids came in, they had to sign their names on the "voter rolls." If they hadn't filled out a registration form earlier in the week, they had to do that before they voted. (The second question on the mock registration form was: Are you at least five years old? Ha!) 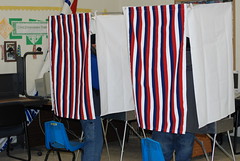 The city let us borrow their voting booths and ballot boxes, which made things feel really official. The IRA let us borrow one of their buildings, so all of the kids got to leave school to come vote.

The tiniest kids had to stand on chairs to reach the voting booth. My big kids helped them fill out their ballots (anybody caught coercing an elementary student to vote for a certain candidate was threatened with the wrath of Angie). 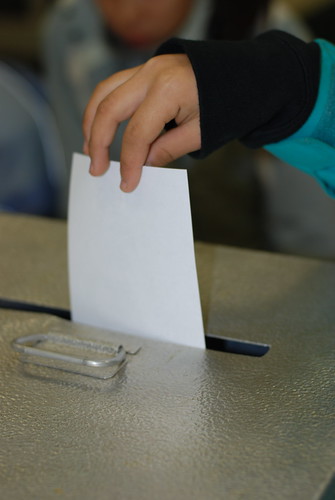 The kiddos put their completed ballots in the ballot box. 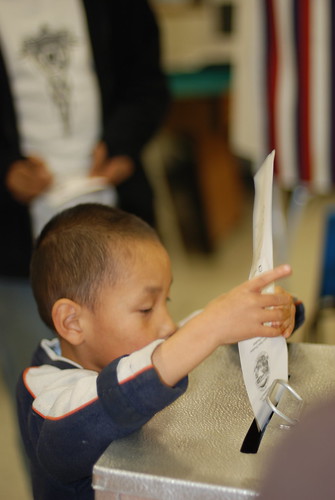 My older kids voted too, but, let's face it, 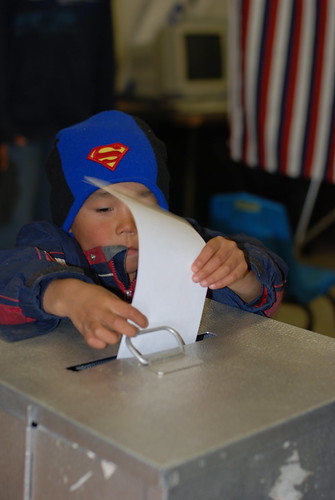 (Note to my students: I still heart you!) 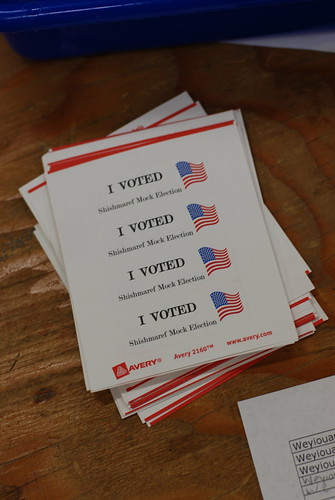 We made stickers to give to all of the students that voted. 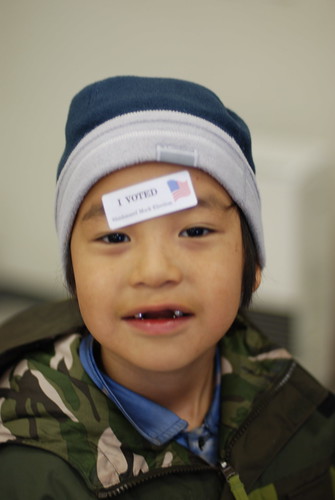 Some of my big kids decided it would be cool to put their stickers on their foreheads... 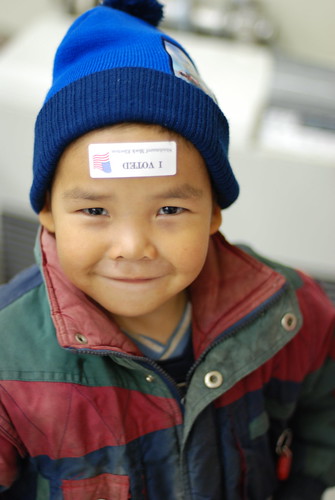 starting an epidemic of little kids who also put their stickers on their foreheads. 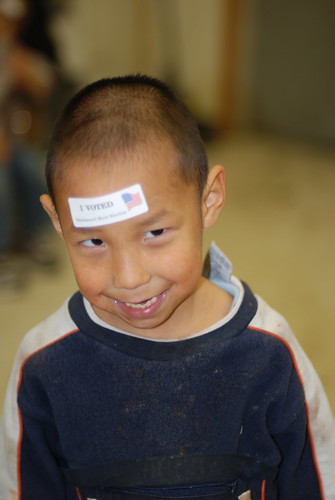 I have to admit, it was kinda cute. 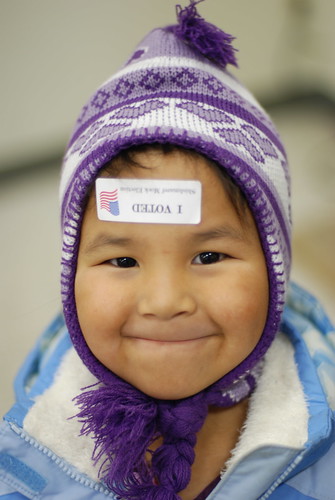 Don't you just want to take this girl home? I do. Unfortunately, her mom and dad like her a lot too... 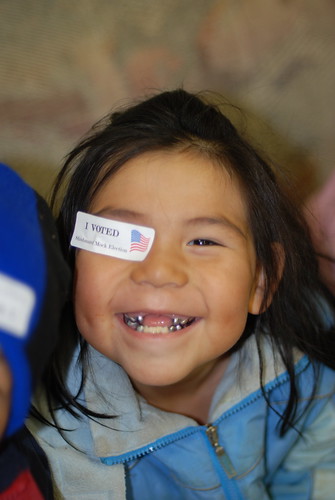 This little girl took things to the next level. 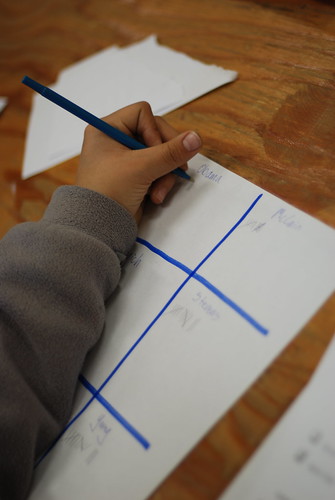 I let my big kids tally the votes. They learned what it was like to be an election judge (what if somebody circled Barack Obama and Sarah Palin?) and had to determine when to disqualify ballots. It's too bad we didn't have punch out ballots. Then I could have introduced them to the intricacies of chad. As you can see, we used the highly scientific method of tally marks. 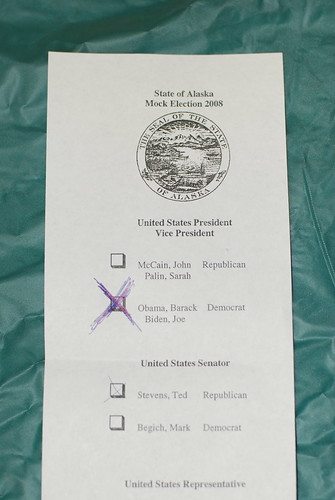 We found this ballot when we were counting ballots. I laughed. This pretty much sums up the sentiment of most of my students.

When all the votes were counted the results were as follows:

My big kids were furious. They blamed the results on the elementary students and suggested that we do the vote without them next time. I tried to explain why it wouldn't be fair to disenfranchise over half of our school, but I don't think they bought into it. Maybe that's a lesson for next year... Reflect on your life as a teacher in a new place.