Today was one of the best days I've ever had in Shishmaref (and there have been some pretty good ones). Today I learned how to butcher a spotted seal. I didn't actually do any of the butchering, but I watched very carefully.

***WARNING: The following post contains seal guts. Lots of them.***
First, you make a cut through the skin all around the tail (like in the above picture). The blade Aaka is using is called an ulu. You can tell by the condition of the blade that this wasn't the first butcher of the day...

These seals are spotted seals. They are not used by the Inupiaq people as food, even though some places in Alaska eat the spotted seals. The people of Shishmaref only ate the spotted seals during starving times. Otherwise, the meat is used to feed dog teams. The skins, however, are beautiful and used in making mittens, hats, ornaments, and just about anything else. 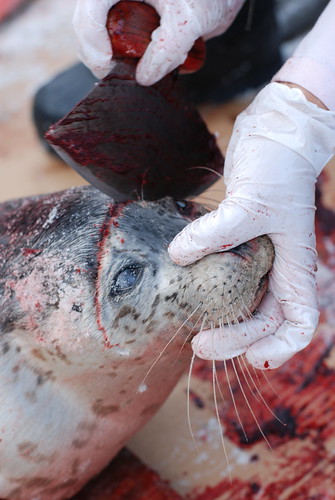 You make a similar cut around the head. I am aware how disturbing this picture is. Aaka noticed me staring sympathetically at the seal, and she said, "Real cute, huh?" Then she commented that it's easy to see how people are against eating meat when you see the butchering process up close. So much of our food is generally processed, so we never see its original state.

We then had an interesting discussion about the use of animals to sustain human life. Aaka said that the Eskimo way is to kill animals with as little suffering as possible. Good hunters will keep all of their tools in good condition to be able to end an animal's life quickly without much pain. Good hunters and their wives will even keep their knives sharp to be able to butcher the meat quickly and easily.

There's an Eskimo legend about a man who turned into a caribou. He lived with a herd, and they explained to him the difference between good and bad hunters. Bad hunters killed for pleasure and wasted meat. Good hunters killed for food and took care to waste no meat. The caribou always fled fromt the bad hunters, but they allowed to good hunters to catch a few of their herd. The caribou would comment among themselves about the state of the hunters' tools and their treatment of their prey.

The lesson of the story is that the best way to have success as a hunter is to treat the animals with respect, even after they've been slain. 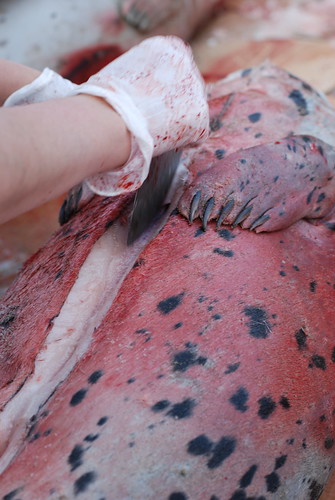 Of course, this story was told as Aaka continued to butcher her seal. She sliced the seal down the middle of the tummy. 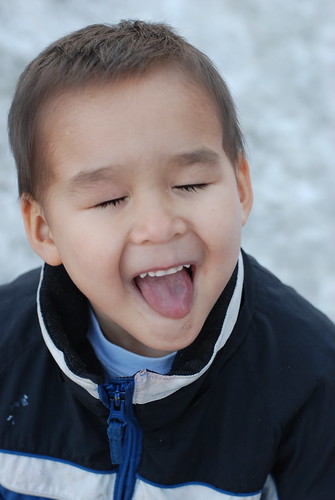 This little guy kept interrupting in order to get his picture taken. 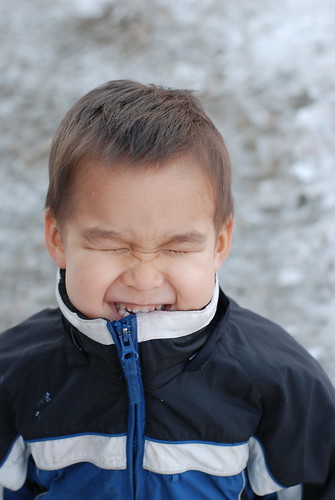 He insisted on equal screen time as the seal. 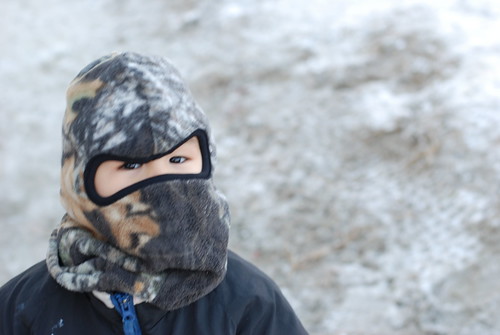 But after modeling his ultra cool camo face mask he got cold and went inside. 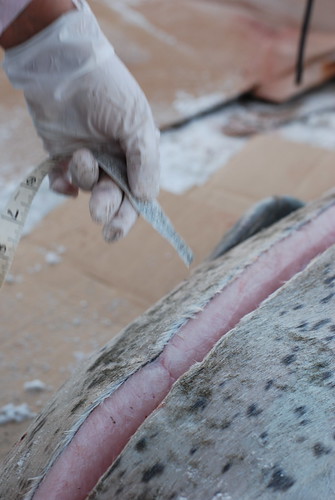 We were taking samples for the Fish and Game Department, so we measured the layer of blubber. Turns out, spotted seals have slightly less blubber than Alaskan teachers who have spent a lot of time on their couches during the last three and a half years... 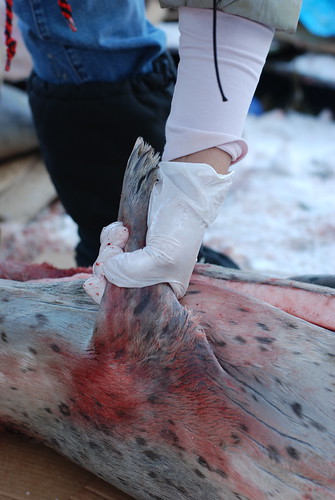 Then we felt for the joint in the flipper. You're supposed to cut right on the joint. 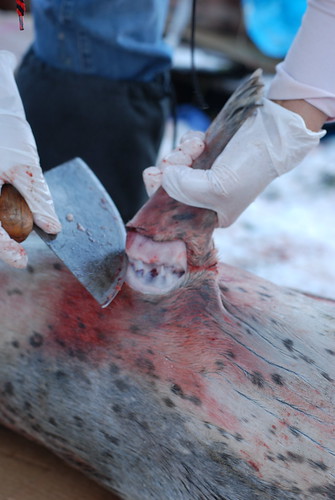 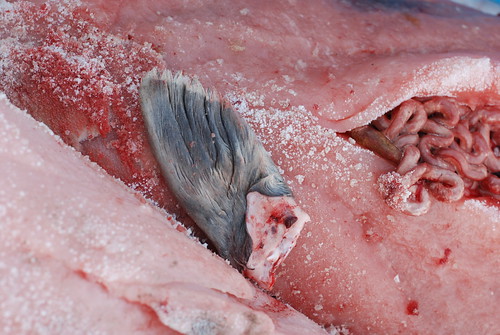 Once the flipper is cut off, it's discarded. This flipper happened to land on a previously butchered seal, close to the intestines. I'm kind of amazed that I can take pictures of this without vomiting. 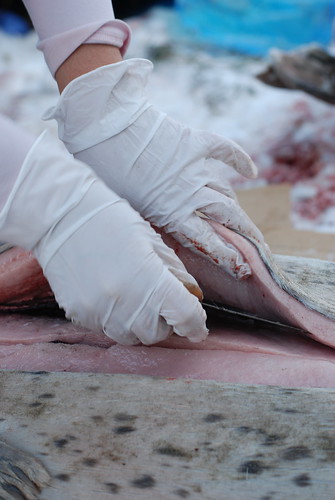 Then you use your ulu to cut between the blubber and the dark meat. 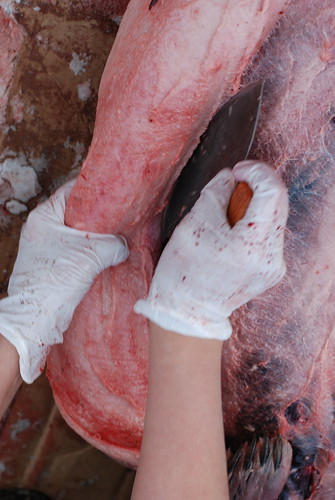 If you're doing it right, you will be able to easily slide the ulu underneath the blubber along the contour of the body. 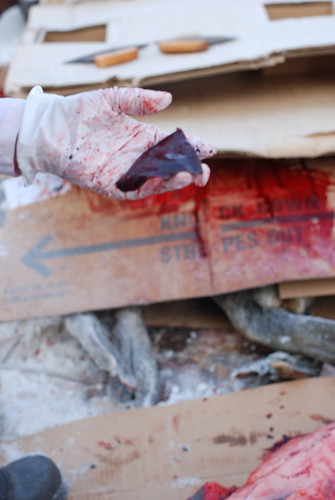 We had to take a sample of the liver and the kidney. I can't remember which this was. 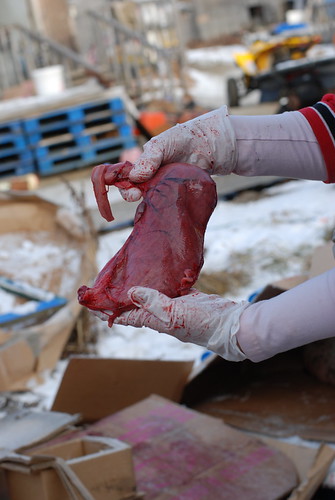 This one I know. This is the stomach. We also needed it for our samples. 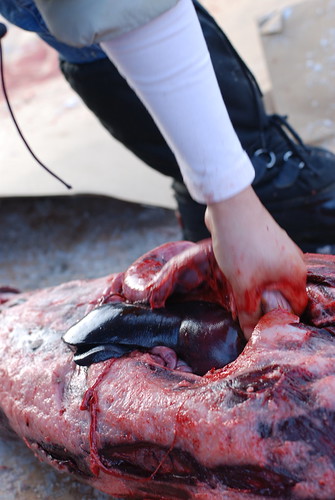 Anybody know what this vital organ is? Yeah, neither do I. I just know it was in the way when we were trying to get to the stomach. 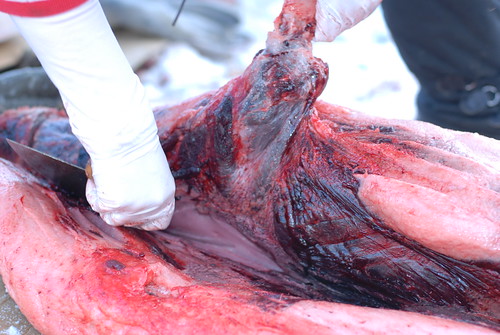 Inupiaq girls used to learn how to butcher seals when they were about ten. Nowadays school takes up a lot of the time that would otherwise be used learning how to butcher. Most women now learn after they're finished with high school. 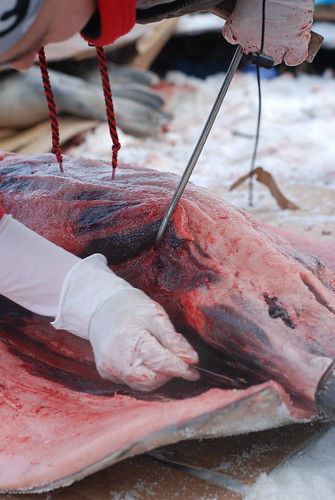 Sometimes it's easier to hold the seal with a metal hook while you cut. I got to hold the hook for one seal. I felt very helpful. 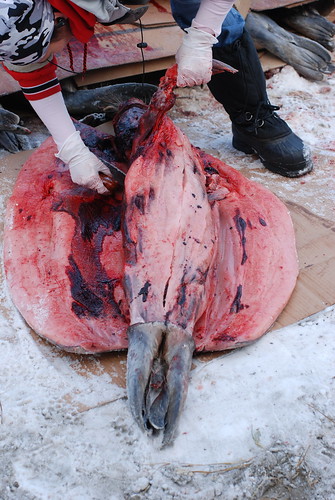 This little guy is almost done. You can see that his skin has been almost completely pulled away from his body. 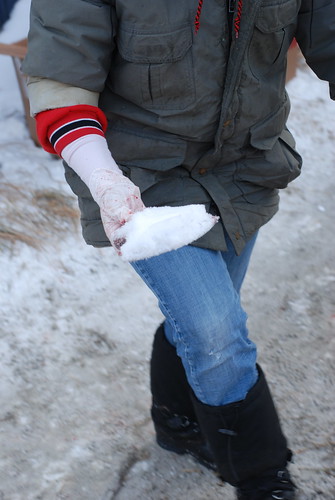 If your skin ends up being really messy, you need to carry over some snow... 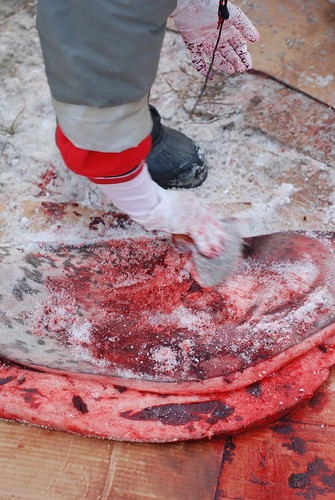 And use it to clean up. 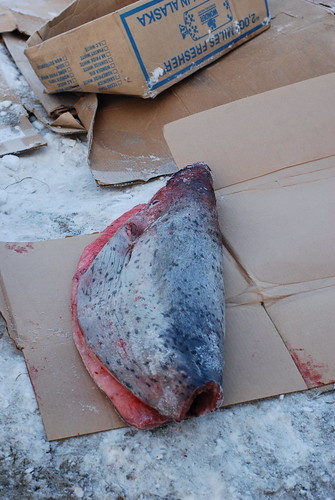 Then the skin gets folded over and put in a pile. 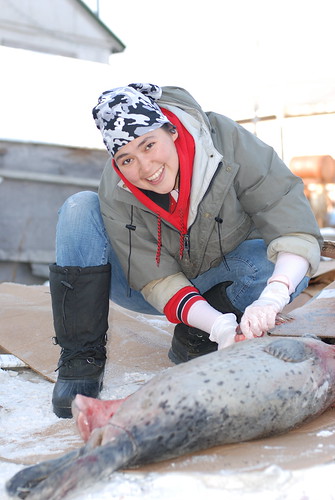 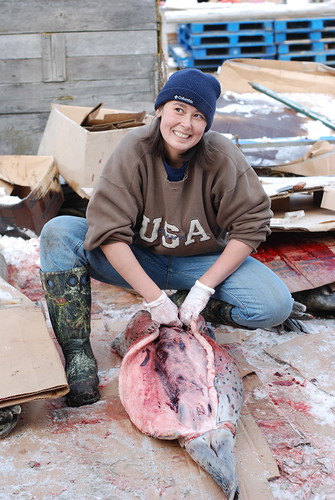 and her lovely sister Kate for modeling the correct procedure for spotted seal butchering. Stay tuned for our next installment when you learn how to qapsraq (and, possibly, what qapsraq means).