When I was a young child, and I slid down a snow/ice covered hill, I called it sledding.  In Shishmaref, the same activity is referred to as sliding.  In fact, I've heard adults correct little kids if they call it sledding.  (The Inupiaq word for slides down a hill is sisugaqtuq; although, I've never heard anyone use it.)

I think it's because, in Shishmaref, "sled" means something very different from the thin plastic discs I grew up "sledding" on.

The picture above is a typical Shishmaref sled.  The men around here make them.  It is a very involved process that includes steaming the wood to get it into the right shape. 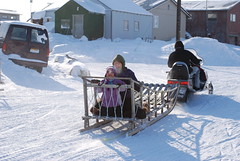 These sleds are attached to snow machines and used to haul ice, groceries, people, animals, stove oil, and pretty much anything else that needs to be carried around.

So, sledding is a practical every day activity, not something you do for fun.  Hence, the term sliding to differentiate.  Kids in Shishmaref spend a lot of time sliding because we have snow for most of the year.

When I came out of the gym tonight, a gaggle of kids were sliding on a hill behind the school.  Luckily, I had my camera with me, so I was able to capture the magic. 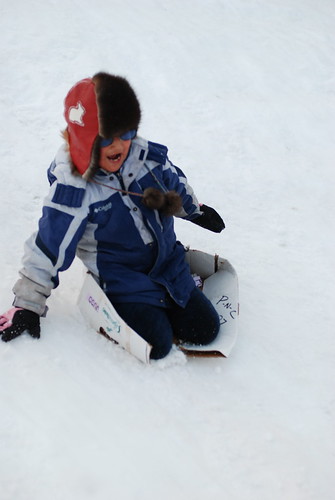 Some were using boxes (I so remember wishing I had a box during elementary school recesses when it snowed). 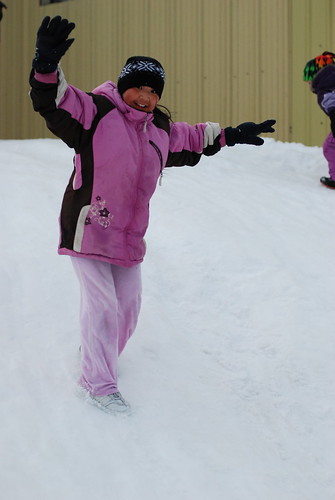 Some were snowboarding sans snowboard. 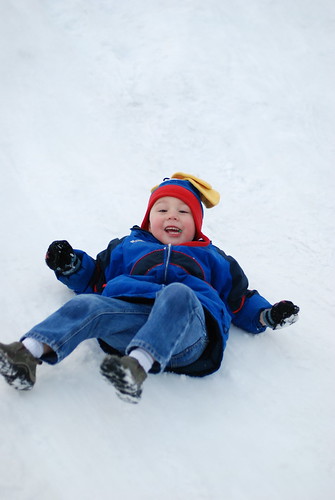 The little ones were mostly going down on their backs or tummies. 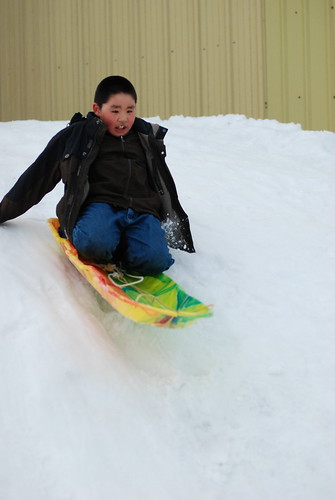 Some kids were actually using a little plastic sled (although the activity is still referred to as "sliding," even if you're using said sled).  This sled, with a different boy on top, crashed into me and a surrounding group of small children, knocking me completely off of my feet.  Do not worry gentle readers, I and -more importantly- my camera emerged unscathed (also, the small children I landed on top of were only mildly injured and traumatized). 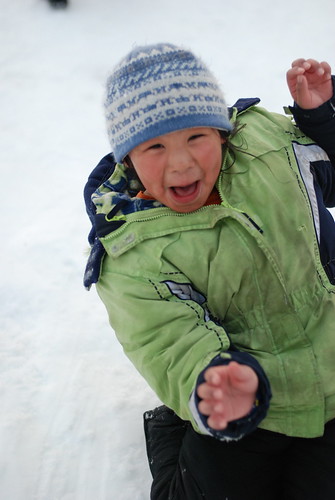 The kids were having lots of fun, and they were being super cute.  I had a lot of fun watching them.  It was one of those moments when I've been truly grateful to be in Shishmaref.

(By the way, all of these pictures were taken after 10:00 pm!  The daylight is courtesy of living in the "Land of the Midnight Sun.")