A couple of posts ago, The Alaska Teacher introduced you to the fascinating world of church by phone. Despite our peculiar circumstances, we function pretty much like any other church unit. We do all of the normal things. We just do them in non-normal ways.

Yes, ladies and gentlemen, that is a wading pool doubling as a baptismal font. Caleb's ingenious mother (who also happens to be my amazing super-dependable and supportive second counselor) ordered the pool as a way to keep her son from being baptized in the nearby river (which would have required breaking through ice).

Same Priesthood, same covenants, same promises- it just looked a little different than it normally does. It's a perfect snapshot of life in the Bush Branch: the Spirit is the same, the ordinances are the same, and the responsibilities are the same. We're just forced to be a little bit creative. 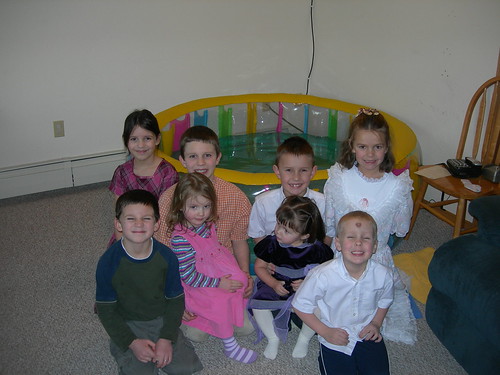 As a postscript, here is Caleb with his brothers and sisters and four friends who are also members of the branch (Baby Jonah is not pictured). Together, they make up the largest contingent of our Primary. I have not met any of these children, but the Branch President tells me that they're all delightful, smart, and well-behaved. I do not doubt it at all. Sometimes they sing during Sacrament Meeting as a special musical number or give talks, and they always melt my heart.

(If you happen to see this picture in an upcoming issue of the Friend, remember you saw it on The Alaska Teacher first!)